Home » About Us » Lydia Mestokosho-Paradis 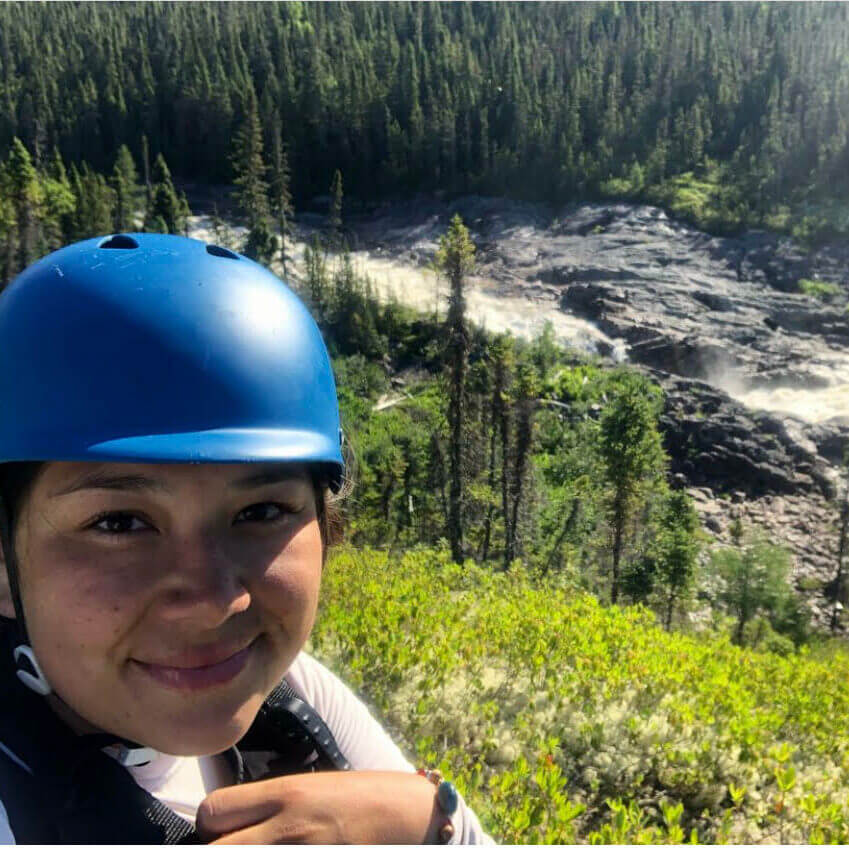 “The Magpie is like therapy,” Lydia Mestokosho-Paradis says. “You find calm there. You reenergize. It’s a time to reflect.”

Mestokosho-Paradis has rafted the Magpie with Boreal River Adventures 4 times.  She was part of trips organized for young Innu women. After one of her trips, she spoke to Danny Peled, the owner of Boreal River, about the life of a guide and what it would take to do some guiding.

They talked about the river and Mestokosho-Paradis’ relationship to it. Her people had been using the rivers in the region for centuries, and Peled realized that Mestokosho-Paradis, who also has a master’s degree in fine arts, could bring something totally new and unique to this type of trip: a cultural interpreter.

“My ancestors were nomads who followed the caribou,” Mestokosho-Paradis says. “When I think about their life and what they had to do with young kids, like the portages, they had to be so strong mentally and physically. It makes me proud.”

With her new role as Boreal River Adventures Magpie River cultural guide, Mestokosho-Paradis is building on her job at the Innu Cultural House. There she does everything from curation to giving guided tours to tourists from around the world.

“I can do whatever the group wants. I can speak to the history of the local Innu, I can show them traditional medicines, tell them stories about animals, or tell them the contemporary story of what it’s like to be a 30-year-old First Nations woman living here now.”

She hopes to teach guests on the Magpie about the area and how the Innu used to travel the rivers. About how Innu families had preferred hunting grounds, and how elders still remember the old ways.

“I connect with my culture on the Magpie. I can see what they did. It’s not exactly the same but descending the river gives us an idea. You can speak with elders now and they say things, ‘to get there you go along this river for two days then portage near the mountain and then take a left…’. It’s all still in their heads. It’s beautiful.”

Learning from her elders

But for Mestokosho-Paradis it’s as much about teaching as it is about learning. She says she likes to have conversations with guests, to learn about their cultures and where they’re from. She also likes to learn about what people think about the Innu culture.

“It helps me show how our modern lives work. We go to school, work, we’re modern, but we’re still connected to the land. We’re still nomads in a way. Lots of Innu will go into the bush for a month to hunt and fish.”

Mestokosho-Paradis says she’s excited to be able to share her knowledge of the region with Boreal River guests, and is hoping to speak with elders who remember travelling the Magpie when they were young to get more stories about the area.