What’s the deal with packrafting?

Going to the frontier is always worth the effort. It’s where the unique places and experiences are found.

In the case of packrafting, we’re at the junction of 2 frontiers of wilderness travel: backpacking and paddling. Technology has finally caught up with the ambition to hike to remote locations, and get to a lake or river. Instead of turning around and going home, roll-out a boat and keep on cruising (The reverse operation is also true when you get back to land).

Packrafting is the minimalist counter to a busy lifestyle. It’s the ability to thrive in the backcountry while embracing the ultra-light ethos and the freedom therein that has lead to packrafting’s popularity. There’s room for everything you need, except your worries – which you don’t need anyway.

Packraft – the boat that fits in your bag

In essence, a packraft is a small inflatable kayak. It is lightweight (6-11lbs), packs down tiny, is stable enough to run whitewater, and is large enough to accommodate you and your water-proofed gear.

Because your boat fits in your bag, along with all your other stuff, it’s an ideal way to explore previously inaccessible terrain. And since modern packraft designs are relatively stable, even a novice paddler, with great instruction can be paddling Class 3 whitewater in a short period of time – often on their first day!

However, if a rapid looks a little too big for comfort, or if we need to walk around an impassable section, portaging a packraft is a cinch.

A post shared by Adventure Travel Expeditions (@borealriveradventures) on Dec 10, 2018 at 6:44pm PST

It’s said that after Leonardo DaVinci sketched the flying machine and the aerial-screw – precursors to modern airplanes and helicopters, respectively, he then moseyed down to his favourite lazy river. He spent two days constructing a bulky wooden raft, then lay back to casually float downstream sipping sangrias. Just as he was dozing off, his raft bumped into the bloated body of a dead cow that was trapped, floating and swirling in an eddy.

With his incredible powers of deduction, Leonardo realized how he could have had that victory sangria much earlier. Thus, he abruptly poled back upstream…. strode to his work desk… and added one more design to his sketchpad. Although gruesome by modern standards, his new boat, was a revelation. It consisted of several inflated and watertight animal organs sewn together. This boat was portable, easily deployable, and initially edible.

The packraft, as it would eventually be called, was conceived! … (see corroborating evidence below). 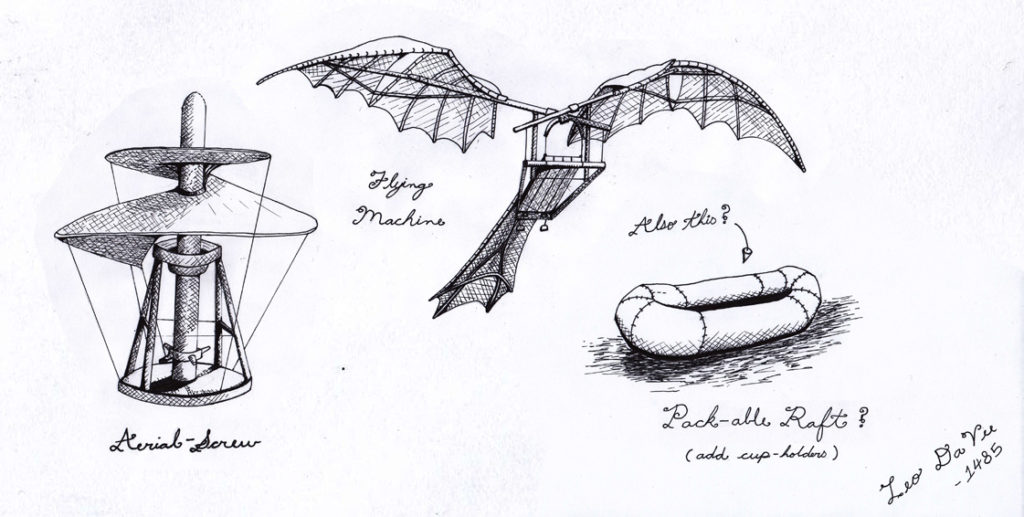 Unfortunately, like many of Leonardo’s ideas, the packraft was ahead of its time and so wooden boats had their day. Eventually, the rubber inner tube was invented leading to smoother riding vehicles. When turned horizontal, they were a great way to float downstream with your friends and a couple of brewskies.

The age of inflatables had begun!

Just like the tree of life, designs of inflatable watercraft began to branch out — behemoth rafts were tried on the largest rivers in the world. Smaller rafts, inflatable kayaks and catarafts were the stuff of narrow creeks and rivers.

Floor designs went from non-bailing “bucket boats” to self-bailing, and propulsion involved 1 and 2-bladed paddles, oars, and even motors. In time, the right inflatable boat combinations were found for the right rivers… to maximize fun and safety.

However, in almost every scenario, the boats needed a mode of transport, beyond just human, to get to the action.

There was a single exception. On one of the smallest twigs of the tree, somewhere between inflatable kayaks and those pool-toy dolphins from Marineland, emerged the packraft. 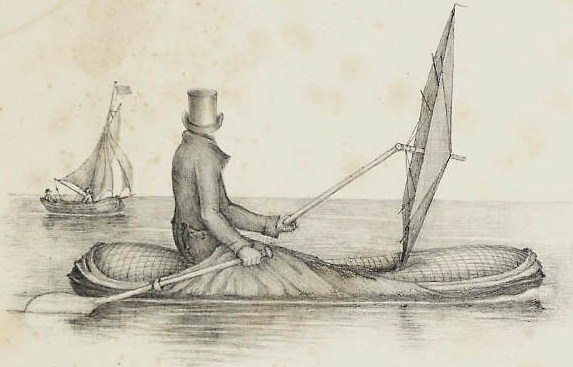 The first recognizable packraft was built by Lt. Peter Halkett in the 1840’s. It was made of cotton impregnated with Indian rubber. His boat was created in London, England but designed for carrying across the rugged terrain between rivers in the Canadian Arctic, where his father worked for The Hudson’s Bay Company.

The “Halkett boat” was later deemed invaluable to several early European Arctic Explorers. It had the added benefits of transforming into a raincoat or groundsheet, depending on the design. Accessories also included a walking stick, which became a breakdown paddle, and an umbrella, which remained an umbrella while in the boat, but could be used for downwind sailing.

The first whitewater-capable packraft is traced to 1952 where it was paddled on the Urique River in Chihuahua, Mexico by Dick Griffith. He later brought the packraft to Alaska where its portability over the difficult terrain between watersheds was extremely practical, much like Halkett’s boat in the Canadian Arctic over a century earlier.

The packraft was introduced 3 decades later to the Alaska Mountain Wilderness Classic adventure race and has been a mainstay in the competition ever since.

Alaska, is generally regarded as the incubator of contemporary packrafting and the source of its current spread to some of the far reaches of the world including: Western US, Mexico, Central America, Patagonia, Southeast Asia, Australia, New Zealand, Scandinavia and other pockets of Europe.

This generation of boats could finally bump a rock and not immediately sink; they were portable, robust, and river- and sea-worthy. At Boreal River Adventures, we use self-bailing rafts with a Dyneema® outer shell and a urethane internal air-bladder. With thigh straps and a comfy inflatable seat, you’re secure in the boat, which leads to greater control and maneuverability.

How It All Works

Once you’re back to shore:· Step out while in shallow water

How practical are packrafts, really?

Really practical! As mentioned, the new generation of packraft is more durable than their predecessors. They pack up small, weigh 6-10 lbs and are stable enough to run the bigger stuff – even on your first day.

Are they cool or will I play the fool?

Packrafting is niche, and granted, not all niches are cool (e.g. dancing the polka outside of October). This niche allows the amphibious merger of backcountry hiking and whitewater paddling – both “cool” in their own right – so you tell me.

If you have any further misgivings, all of our guides like to “nerd-out” about something (fishin’, paddling gear, permaculture, The Habs, etc.). We’ll happily stand or paddle beside you in every photograph and you’ll look super-cool by comparison.

What if I’m no good at Tetris?

Not a strong backpack-space economizer? Our guides have developed finely-tuned packrafting systems for travelling in remote backcountry. Everything from bringing the right (light) gear, to packing your bag, to making sure everything fits in your deployed raft (including yourself). We’ll show you what works for us and you’ll be a nimble packraft-loading-ninja in no time.

So, I can bring everything I need on my back (boat, food, sleeping bag, Teddy)?

We help you pack light… so your balance is “just right”. 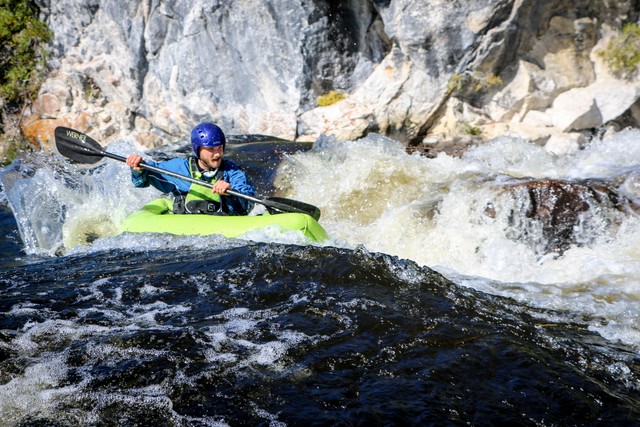 Well that was probably more info than you could fit in a packraft. Hopefully we covered what you wanted to know, but if not, give us a call. Clearly we’re excited about the possibilities these boats allow and we’d love to chat about them or even take you paddling.

Closing statement (feel free to use it on your future packrafter friends):

So go ahead, cut your adult-sized toothbrush in half (keep the bristly end), buy a spork and find a helium-infused trip shirt (that last one is fictional) – because “packrafting” is a your direct ticket to adventure! 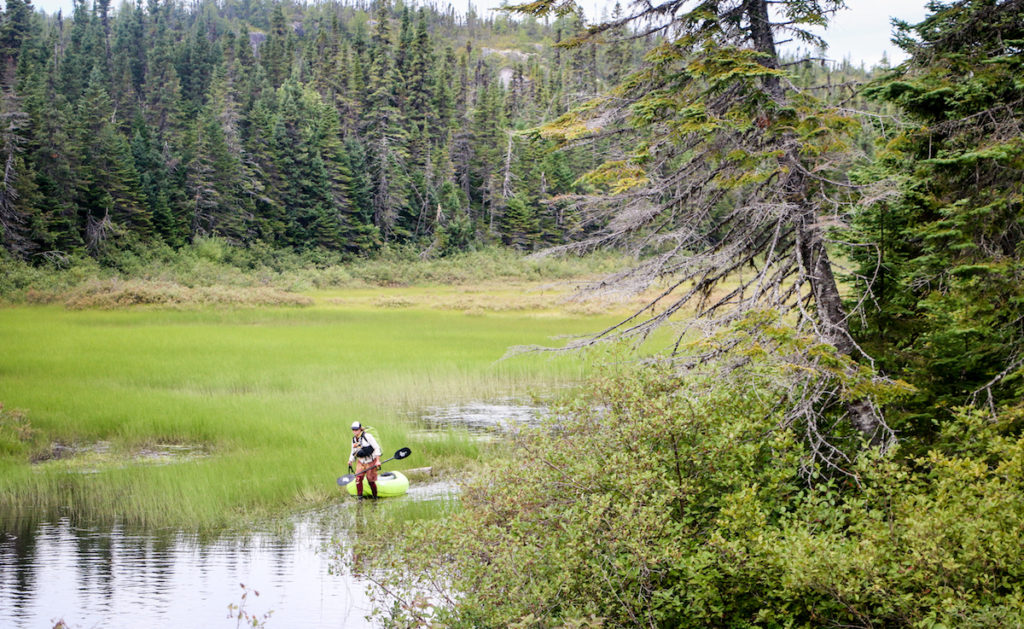 Now that we have packrafts in our adventuring quiver, we’ve come up with 3 great destinations ideal for the intrepid (or prospective) outdoor traveler. Whether you seek:

Boreal River can help you explore each frontier in style.